Product reviews for The Vodou Store and Wolf and Goat

Today I'll be blogging about my experiences with several 'conjure rubs,' and 'flying oil' from The Vodou Store, as well as 'Clarity Oil' and 'Eyes of the Night' from Wolf and Goat. This entry will serve as a mini review for each. I've enjoyed each of them, and wanted to pass them on, but first a little bit about each store, and associated links.

The Vodou Store is a business venture of Elizabeth Ruth, Hellfurian Liontari and Docteur Cæli D'Anto based in Chicago. Hellfurian, better known as Jeff Cullen of Jeff Cullen Artistry here is the one responsible for several of the incredible altar statues I've posted here over the years. But more on the store. The store serves as an incredible resource for condition oils, conjure assisting oils, sachet powders, incense, 7 day candles, curios, dirts, herbs, resins, and curios. Also, divinatory tools, altar shrine boxes, and more. Their product line depth is very thorough for practitioners of Hodou, but those of other traditions will find much here to utilize. The web page itself is very professionally produced, with products being easy to find and checkout for purchase. The site also offers divinatory readings as services, featuring Tarot, casting the bones, and Norse Runes. What's not to like? This site has it all, and it's a frequent stop for me, even if I'm 'not buying anything' to see what new product lines would come in handy with my practice.

Wolf and Goat exploded on the scene recently (at least for me) and their site is a realm of wonders! The proprietors, Jesse Hathaway Diaz and Troy Chambers are rising occult superstars. Jesse Hathaway Diaz was recently wrote a chapter in the anthology, Serpent Songs published by Scarlet Imprint. Appropriately, His was working with multiple traditions, something that his web site is all about. Troy Chambers is a genius sculptor - the crossed statues he releases are nothing less than awe inspiring. Ranging from Arcane Spirits, Goblins,  and Imps, to Quimbanda Statuary of the Exu's and Pomba Gira's, as well as those spirits of the Goetia, and Traditional Witchcrafts... you'll find a whole other level to his works due to his mastery of the clay as an artistic medium.

Now on to the product reviews!

I recently found The Vodou Store's 'Conjure Rubs' intriguing. I like the idea of oils and botanicals being harnessed as a boosting effect on yet more conjure and spellcraft. This I had to try!

The first conjure rub, 'Hand Lotion No9,' plays upon the theme of the old movie about a gypsy love potion that hath both love and comedic affects. anyways it is aptly named! I have found a use for it particularly in working with the Lamia spirits and succubi of my personal practice, annointing myself and the statues before a devotional or a working yields a powerful boost to interactions with these spirits. Both presence, and even physical interactions, and mental contacts are boosted under the influence of this blend. It's already a big favorite with my spirits and I wonder how far my 1/2 fl. oz is going to stretch.

The second, 'Shielding Hands,' I have put to work for general warding, for anointing my Vedic sorcery based shielding bracelet, and when casting spirit based wards in the spheres of Hekas ritual. All was phenomenally enhanced from the flow of energy towards the warding, to the shaping and release of that energy. Another instant favorite. Color me Very impressed. That's two for two now.

The third, 'Healing Hands,' I eagerly put to use with Reiki. I was working on my Second Degree Reiki certification, and I was eager to see how much it improved the flow of Reiki energy. While most was practice based, in one case it really tuned up my empathic sense and the ability to direct the Reiki energy in the most suitable ways. It's definitely a keeper. As a new Second Degree Reiki healer I can't wait to use this conjure rub some more!

The fourth, 'Witch's Hand,' I have only used in tandem at some points with the other conjure rubs, I'll have to experiment more in a solitary manner to see it's individual results more, but so far the results are positive.

Now for the most anticipated 'Flying Oil.' I was most enthusiastic to find that The Vodou Store had finally released their version of flying ointment with this product and most eager to try it out. Application to the traditional points on the body introduced an almost instant tingling sensation as the oil began to work. As the influence deepened, a sense of dislocation within the body began to manifest. At that point, going astral was fairly simple. The duration is sadly somewhat short, but you are not risking anything but a bit of nausea if you at some point re-apply. Fellow practitioner, Fiona Benjamin has experienced this oil as well with a 'parting the veil' experience.

This wraps up The Vodou Store's products, now for Wolf and Goat's

I have experienced a single encounter each with these oils, but their results are memorable. The first was Clarity Oil. Here is their description off of their etsy site: 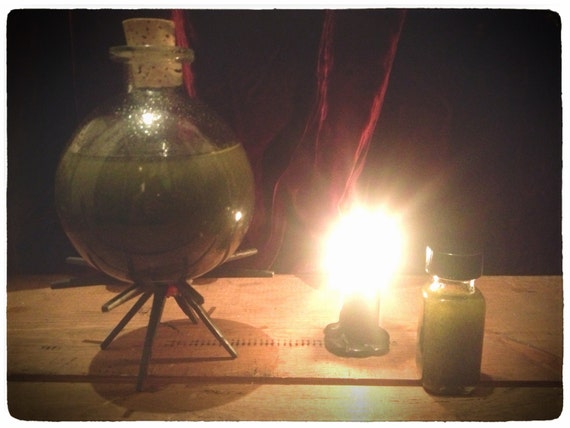 Harnessing the ability of the corvid to process decay, and the eyes of a child to see without disbelief, CLARITY OIL provides access to clearer visions - of eyes, mind or spirit - and the promotion of mental ability and intuition...Clarity Oil incorporates a variety of animal mumia and plant material based in a mixture of Anise Oil and Frankincense oil, focusing on the power of the liver and the grave dirt of a child persuaded to aid in the suspension of disbelief through the power of leaves plucked from a whirlwind.This oil is both very subtle - and very strong. It displays itself in an initial mental boost and sharpening of sight and focus, with a slight sense of euphoria and inspiration, giving way over the next few hours to increased perception and intuition, improved spirit sight, and a calm reasoning ability.A fascinating and enchanting concoction, Clarity Oil is a personal favorite of Wolf & Goat and holds potential for everyone - from witches to students, hunters to public speakers.

A few friends and I decided to take Clarity Oil for a test drive as a part of a particular ritual. The results and after-affects were astounding. We saw the energies within the ritual, the spirits around us. We perceived them and interacted with them in ways hitherto never before in a ritual involving others. We saw ourselves, our good points, but also those things in which we fail. We saw our flaws. It had us after the ritual into a nose-dive of depression over those flaws, but at the same time it provided an impetus a drive to do and to effect change for the better. Projects put off again and again, were pushed through under the influence of Clarity Oil. I'm now a huge fan, and I have some on order. 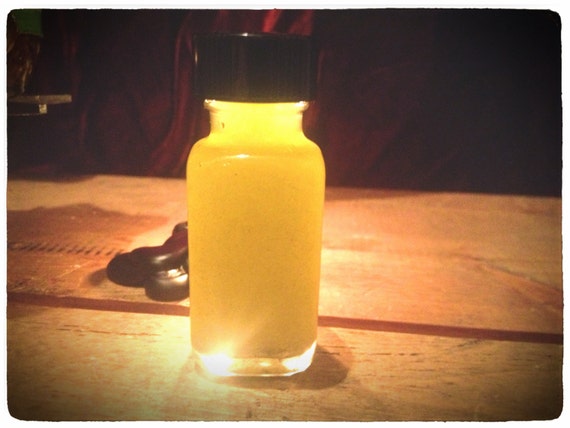 The spread of panic in the gut in the dead of night, an unsourced rustle on a darkened path, EYES OF THE NIGHT OIL is the quickened breath at the perception of threat, and the self-loathing of unfounded fear.This oil is used to create illusions of fear not based in reality, creating phantoms of the mind and tricks of the eyes to lead someone down a tunnel of terror filled with self-loathing at one’s own unfounded fears. Excellent for causing distraction, extended torment in small but increasingly harrying ways, and for turning focus away from true issues to minor, invented ones. .The oil is comprised, in part, of:Animalianon-poisonous spider • frog • wasps (stingers removed) • spider web • small bloodsucking insects • snakeskin • mouse feetVegetabilia mistletoe • cat's claw • tobacco • yew • euphorbia • ash leaves • scrap burlap •Mineraliatiger's eye • black jade • dirt from a busy street taken at nightamongst many other ingredients...In addition, the entire oleum was ensorcelled by mouse.

Eyes of the Night was a different experience. The spirits of the oil, tried immediate fears first. Phobias like Claustrophobia, then spiders, snakes, scorpions, and other venomous creatures, none of them rooted deep, but it had only begun to try. Turning my face to Lilith's altar, only seemed to benefit by being treated to Her myriad of Hag faces, but these were no discomfort, but rather pleasing. Eventually, a dark spirit that seemed attached to the oil told me it 'could not 'fix' upon my greatest fear' that's a good result, but I was hoping for a deep confrontational moment within myself, facing my own cowardice, but perhaps I've worked through more of such things after all, and really come to grips with myself, and this is good too. Eyes of the Night is in some ways a subtle oil. While it is beating you over the head with your phobias, it's trying it's hardest to use the cracks it can make to burrow deep and get at your REAL fears. The fears that inform upon the real you, the you that isn't shown to anyone. It's a good oil, and I'll try it again in the future.

Thus ends my review of these excellent shops and a few of their worthy products.