There are times when inspiration strikes...when the muse will not be denied. That moment came while I was sheltering from Typhoon Vongfong. I Had asked my two delightful familiars to act as my muse and the inspiration was near instantaneous. I got inspired and didn't - couldn't let up until the work was completed. I am seriously impressed with the results as well. It also finally fulfilled a vow long made.

Obizuth has her statue. This is a particularly important effort as through my research I discovered quite shockingly that she is an ancestress through the Plantagenet ancestors of mine. Mellusine (featured on Starbucks cups everywhere) was figured by the Chronicler, Gerald of Whales as the true identity of the Countess of Anjou, of the House of Anjou, usually referred to as the Angevins. Whether the origins was made up or truth - who can now say? Richard the Lionhearted held great stock in this story though and often said, "our whole family came from the devil and would return to the devil." To me it seems no small coincidence that I was drawn to her long ago and as I make more stayed efforts to honor my ancestors that inspiration for her statue should finally emerge! Anyways through Jake Stratton Kent's most excellent finale to his Encyclopedia Goetia, "The Testament of Cyprian the Mage, Vol II" - I gained insight into the many names of Gyllou. No less that the King of the North in the Grimoires, also identifiable with Leviathan, and Nicksa, and also bearing striking similarities to Medusa the Gorgon.

She is a true Underworld Queen - Every bit the equal of Persephone through the Cretan mystery rites to Melissa.

Keeper of the Dead who perish at Sea.

She rules over all spirits and sprites of the Element of Water. But also possesses an Arial aspect in which she grows wings or by some stories turns into a dragon. Tellingly there she also possesses attributes of Fire Element.

If it's one thing I've learned recently - It is to honor my ancestors. And so:

I HONOR THEE:
Obizuth, Abyzou, Gyllou, Gello, Anabardalea, Antaura, Alabasandria,
Amorphous, Karkhous, Briane, Bardellous, Aigyptiane, Barna,
Kharkhanistrea, Adikia, Myia, Petomene, Nicksa,
Mellusine, Melissa!
What joy it is to see clearly to the ancestral bonds that bind us together!
Serpentine
Lady of the Deep
Elemental King and Underworld Queen
I give thee praise!
May thy Names be forever reverenced
May thy great Might be ever undisputed
and may thy Grace extend to all who bear your blood.
HAIL OBIZUTH!

On to Subject II:

In my ongoing preparations and workings with The True Grimoire, I took the advice of Jake Stratton Kent in his translation of The True Grimoire and 'M' on the Grimoire Verum Yahoo group and adapted the rite for 'beans of invisibility' to form a magical skull for Scirlin.

Note: the picture above has not been etched with the character of Scirlin or received it's glaze coating. You'll just have to take my word for it that it's pretty amazing with those details added. Now just need a Wednesday before Dawn, some excellent Brandy, and nine days buried at a crossroads. Voila! A potent spirit house for my Scirlin. Admittedly, I probably would have made much swifter progress in the True Grimoire efforts if I'd attempted this adaptation long ago. Well - hindsight 20/20.

On to Subject III:

Ever wanted a skull bracelet infused with powdered human bone, and powerful earth from necromantically charged locations like the Suicide Forest in the shadow of Mt Fuji? Well look no further! 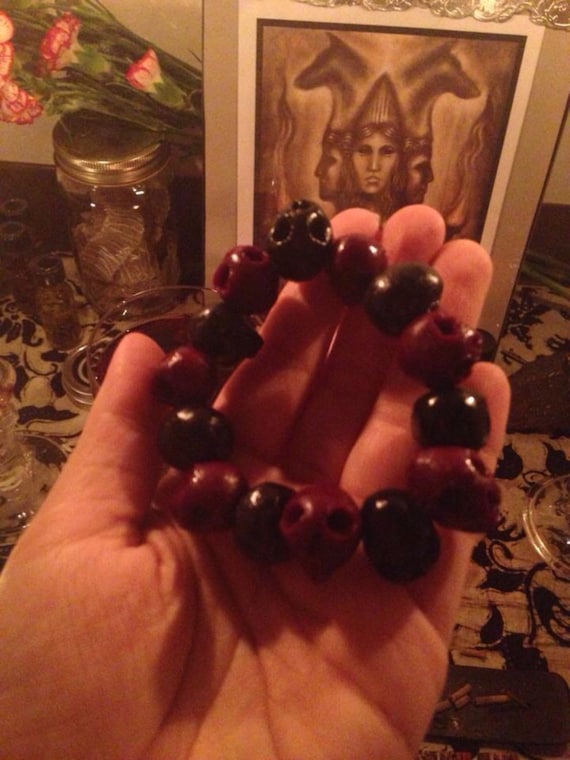 If you read my blog, please give my Etsy so love via 'likes' - you don't have to feel obligated to purchase a thing, but I'd like to know I'm headed in the right direction with my occult art. Alternatively, If I'm terrible - give me some feedback here.