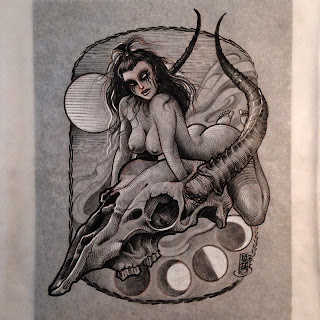 So today we're going to go over the materials that will go into the core. We hit the absolutely essential points as a side effect of the discussion in Part I, but we are going to go into more depth in this post. What sort of things you will absolutely need to add, What kinds of things a spirit might request and the meaning behind it - what clues about themselves you might learn by paying attention to the plant and mineral correspondences of the things they want put in the core. It tells you a tremendous amount about a spirit - they are being vulnerable here for you so treat them with love and respect as you divine out their answers to your questions.

I'm going to break up materials into a number of categories and by no means is this list all-inclusive. Some of my sources that I may use as I ramble are as follows: "Alchemy Rising: The Green Book," by Heliophilus and published by my favorite publisher, Scarlet Imprint; "Techniques of Graeco-Egyptian Magic," by Stephen Skinner and published by Golden Hoard Press; "The Complete Book of Demonolatry," by S. Connolly, and "The Complete Book of Demonolatry Magic," by J. Thorp. I may also reference "Hoodoo Herb and Root Magic," by Catherine Yronwode, though only as some useful insight into how another tradition looks at correspondences and works with Materia. To all this I will fill in what my personal library does not hold by making liberal uses of Google, the modern magician's best friend sometimes.

We'll start with the parts that come from your body. Hoodoo tradition calls these "personal concerns" a handle label to hang upon this category of items that come from your own body.We are really only concerned with a fraction of what Hoodoo goes into when talking about this category of materia. Let me be clear though we aren't doing conjure here nor are we doing Hoodoo. If we have any label to hang upon what we are working here I suppose it would be sorcery and spirit contracting. Regardless, we want to be harvesting hair, nail clippings, saliva, and semen or female pituito-serous juice. Not a lot of detail needs to go on about these items, but they create the personal link from you to the vessel, tying it to you and allowing your energy to maintain the vessel and through the spiritual pact and covenant made (your relationship) it supplies that which the spirit needs and in turn you receive from the spirit that which you need.  The other half of this, the Sigil, we already discussed at some length so let's move on.


This order is somewhat arbitrary, but will look at plant resins, specifically frankincense and myrrh as two very important aromatics. The Frankincense is Solar in nature and has strong ties to deities. Myrrh is Lunar in nature and has strong ties to the night, to death, and to mourning, and the afterlife. I think you can see were I'm going with this. If the spirit is asking for Frankincense it is possibly solar in nature, stronger under the sun rather than at night. It isn't always true - even nighttime spirits like Frankincense a lot of times, but it is a good indication if most of the materials chosen have a strong solar connection - your spirit is likely not of the night-haunting variety, and will therefore be more accessible during the day - and that is when you should perform your offerings (likely at sunrise, but also midday is a popular choice for such spirits). Dragons Blood is another popular resin and has a mixed usefulness in this case. Ruled by the Planet Mars, it is know to dispel negativity it has medicinal uses - Dragon's Blood is known to heal wounds, treat intestinal disorders. Dragon's Blood spiritual aspects are associated with protection it is also associated with Fire and War. It may however cause left-hand path spirits to feel unwelcome. It is very potent at repelling and banishing. That said a lot of my spirits have asked for it when building their cores so perhaps not an issue? I suppose it really depends on the nature of the spirit right? That's by no means all the popular resins. There is also Copal, and Camphor. The absolute best and praised highly for spirit - especially demon summonings was true agarwood or Aloes Wood resin. It is extremely rare due to over harvesting, and what you can get is super expensive for small amounts - but it is sustainably farmed now, so in the future there will be more of it if you support these legal efforts. There is strong support within jewish mysticism for the burning of resins to offer to demons.


Next we will go into woods. Willow has strong connections to demons, and to Lilith and her children. If you can get a species of middle-eastern poplar  called the Desert Poplar, Populis Euphratica by it's scientific name- even better. There is a strong chance this is the better match - however Willows are still related and have been successfully used in working with demons so play on! Holly is a strong protective tree but has been used to repel demons if your spirit is such then, well you'd better be sure that's what he or she wants. Hazel is a strong tree of protection, divination, hidden wisdom as well and is often used by witches for wands and other uses (I use it myself). The witch hazel tree at one time was shrouded in mystery because of its use by water diviners to locate underground springs of water. Because of this use witch hazel was believed to be a tree of the devil. So Hazel yeah is pretty awesome. There are many varieties of hazel with many variations of uses and associations. Cherry Trees are associated with awakenings rebirth, love, romance, affection. Red Sandlewood is aligned with the planets Venus and Jupiter and has uses in trancework and meditation. Sandlewood is also used to purify, both the red and white varieties. Plenty of trees and plenty of correspondences. What I present here are some I have a working relationship with.


For herbs let us consider Cinquefoil, used in witches flying ointment or salve. The five leaves denote man's five senses and only the few who had mastered these five senses were allowed to wear it in ancient heraldry. Cinquefoil was also regularly used in love divinations. Since I highly suspect succubi as having STRONG uses as divinatory spirits, this would be ideal to include if the sweet lady agrees.  Ferns render the power of invisibility. Garlic cloves set at a crossroads appease Hecate, but also drive away many spirits, so use Garlic with caution. Hemlock is very poisonous but it has a variety of important magical uses but exercise extreme care when handling the plant (use gloves and wash hands thoroughly, and ingest nothing it has touched and you should be fine. In Russia it is a satanic herb. However, from Folkard we are told that snakes flee from it's leaves, and that's not too kindly to a succubi kind of spirit as they are definitely related to serpent kind. Hemp was used in love divination and binding rites, so that is a handy thing. It also has connections with prosperity. Mistletoe is ruled by the Sun and is the herb that killed the otherwise immortal Baldr, but afterwards Baldr was restored by the action of the other gods and the herb was given into the care of the goddess of love. Mugwort is aligned with Venus and aids with travel that you will not grow weary. It is used to awaken the third eye prior to rituals and enhances dream-working.  Interestingly Asparagus has connections to intense dreams of demons. Parsley has a strong connection to victory at athletic games and was used as garlands of victory by the Greeks. It also has strong funerary connections to the Underworld goddess Persephone and the Eleusinian mysteries. Plantain is said was once a beautiful maiden that waited for her lover to return from the wars, but he never returned and so she set down roots. She binds wounds and treats spreading skin diseases. It is also potent for love workings. Rosemary is a powerful support for the power and influence of a woman. It is also an emblem for fidelity, and will keep a man in line. Yarrow is often called the devil's plaything and has potent uses in sorcery and magic with connections to divinations as well. Yarrow is particularly loved by Venus. Pomegranates are a potent symbol for the unity of life and death, in Hebrew mystical tradition, the wife of god is conceived as a Pomegranate. Hades Tempted Persephone to remain in the underworld and so she did after eating three of it's seeds. Strong connections to the Underworld and to love magick as sacred to Ishtar and Astarte. It was also used in burial in Egypt. Poppy seeds have long been used as a folk remedy to aid sleeping, promote fertility and wealth, and even to provide magical powers of invisibility. Also used to sow confusion and delay court cases. I hope this give a good starting point when divining with your spirit for the purposes of creating the spirit core.  There are many, many, many herbs, resin, trees, and other items they could ask for. Do the research and find out what the significance of each may be. Check several sources.

Essential oils may be requested which are highly condensed plant oils from the plants whose names they bear. Definitely a strong contender to go into a spirit vessel.

Consider adding high proof vodka, Soju, Sake, a high quality brandy, or moonshine whiskey. Rum is also highly popular with spirits. Consider making whatever is chosen in this category a regular offering in a shot glass before the Spirit Vessel and altar space. This is feeding and supporting your spirit very well indeed. Yup that's what it's called ^_^ A final component is animal components, things like wolf or dog fur, cat fur, nails, bones, snake skins are an incredibly important possibility to go into the vessel - especially from highly venomous varieties.

Once everything is selected via communication with the spirit through a divinatory technique (don't just use the telepathic method as this can mislead if your ego or a trickster pretends towards something you think would be welcome - but is anything but!). Make sure you burn a copy of the spirit's sigil and add the fine ash to the mixture. Enclose in a small vial or wad into a small aluminum foil ball - especially if you'll be making a sculpture or a doll for the rest of the vessel. This blog series on Spirit Vessels will conclude in Making a Spirit Vessel (Part III): Core & Ritual for 'Spirit Loading'.
Posted by Valeyard at 11:52 PM